SUN COUNTRY BUILDERS NOMINATED AS DEVELOPMENT PARTNER OF THE YEAR

The Sun Country Builders team is grateful for the company’s Ruby Awards nomination as Development Partner of the Year.  We look forward to seeing everyone at the Ruby Awards! 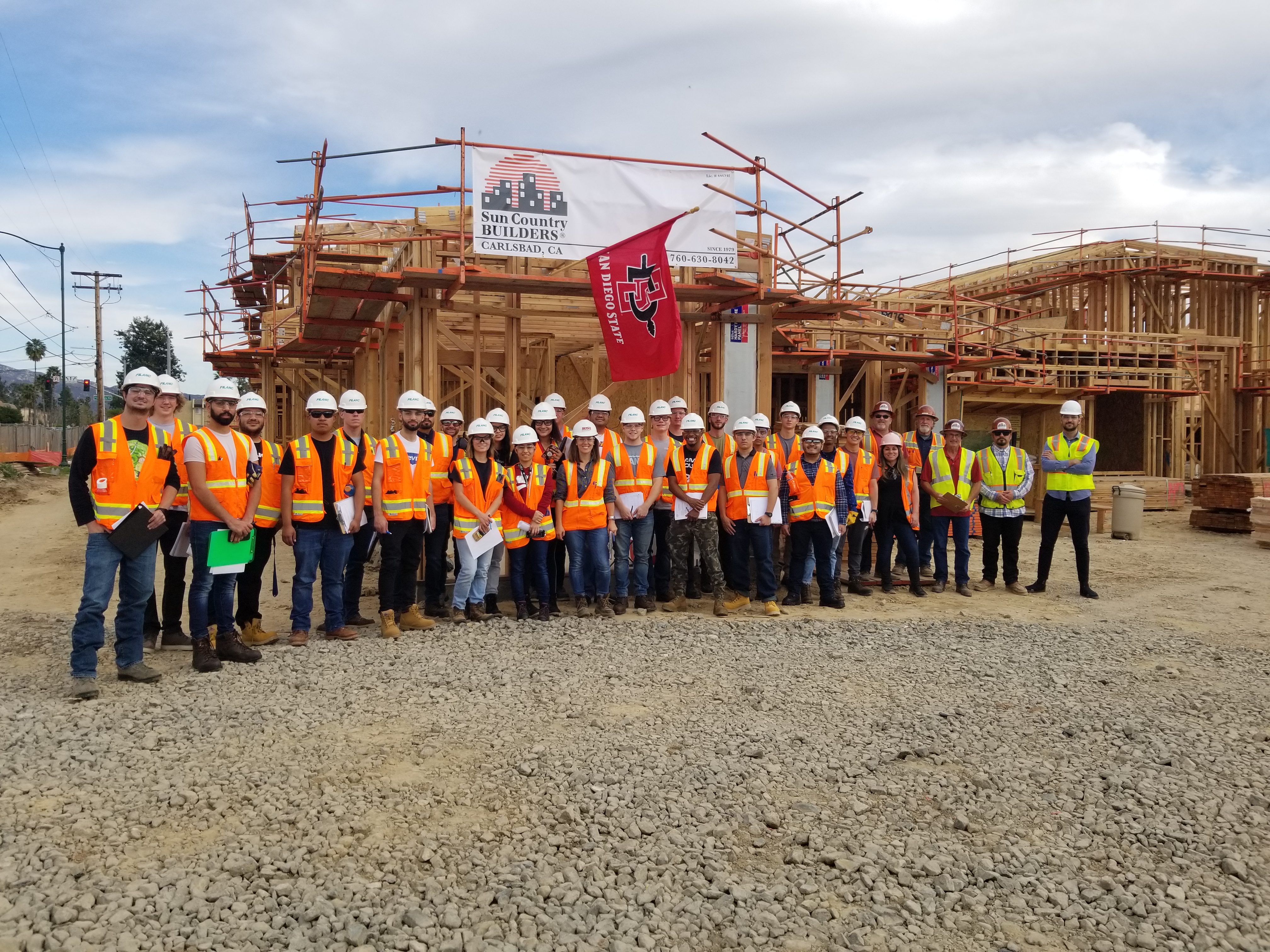 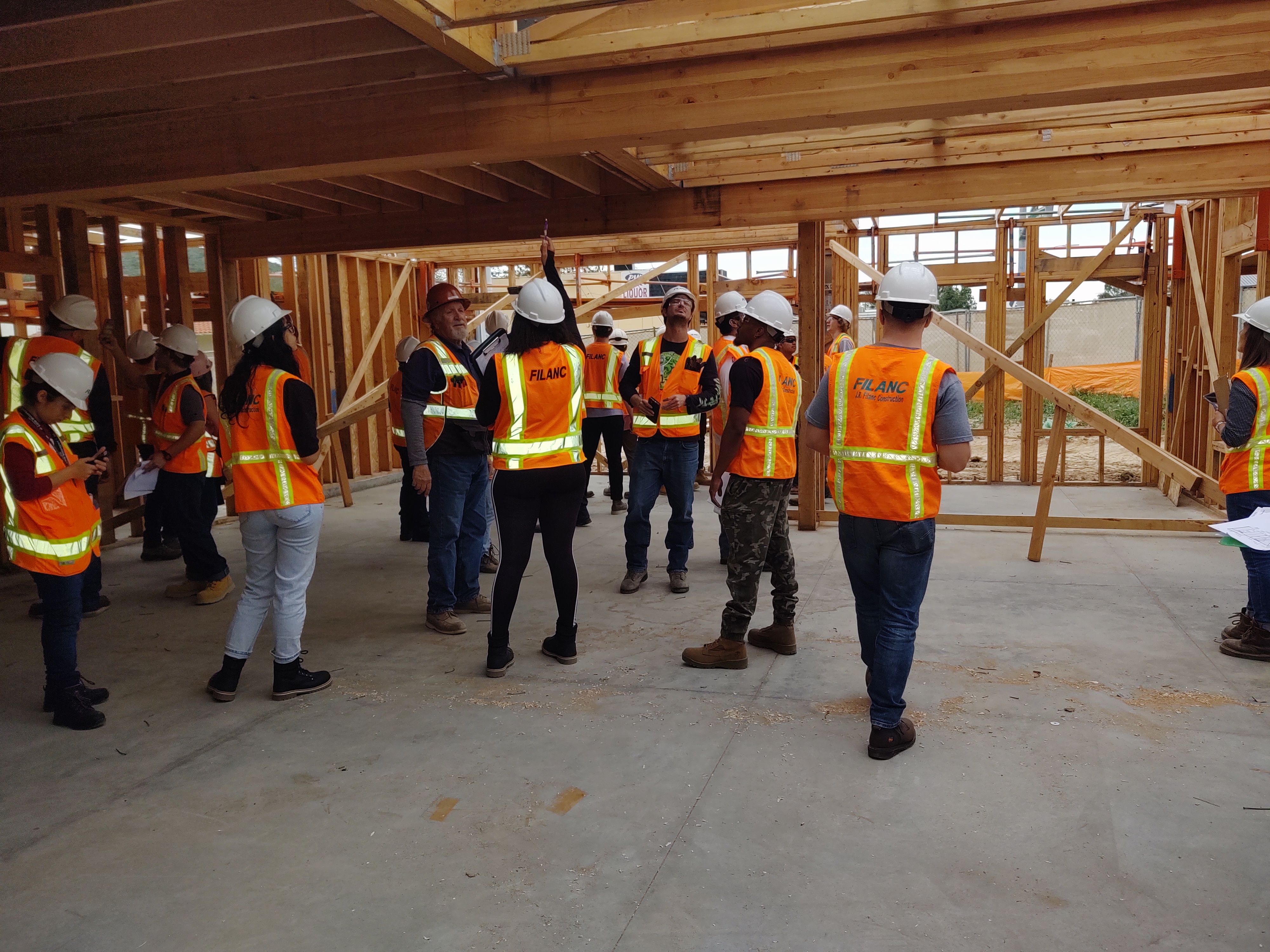 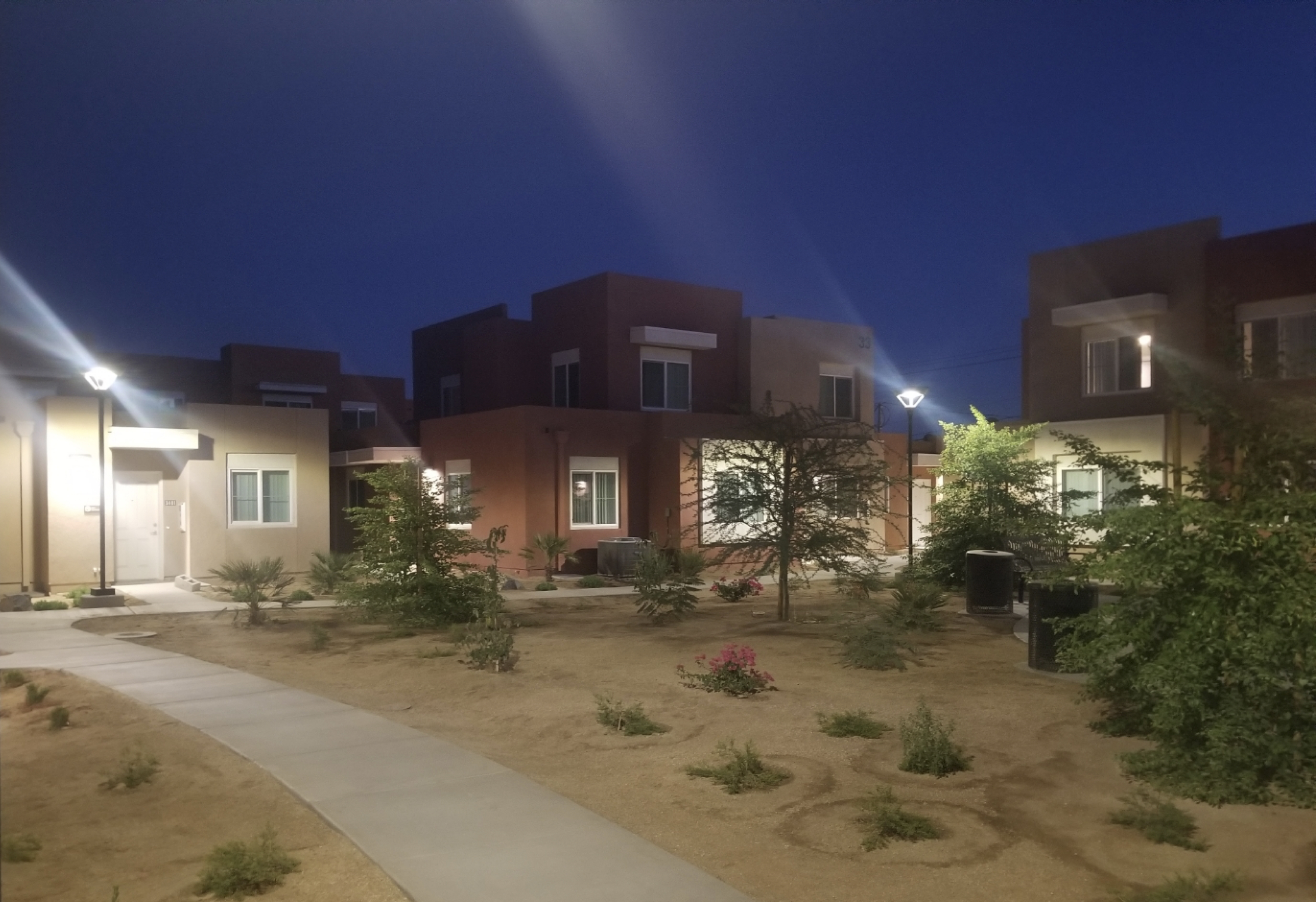 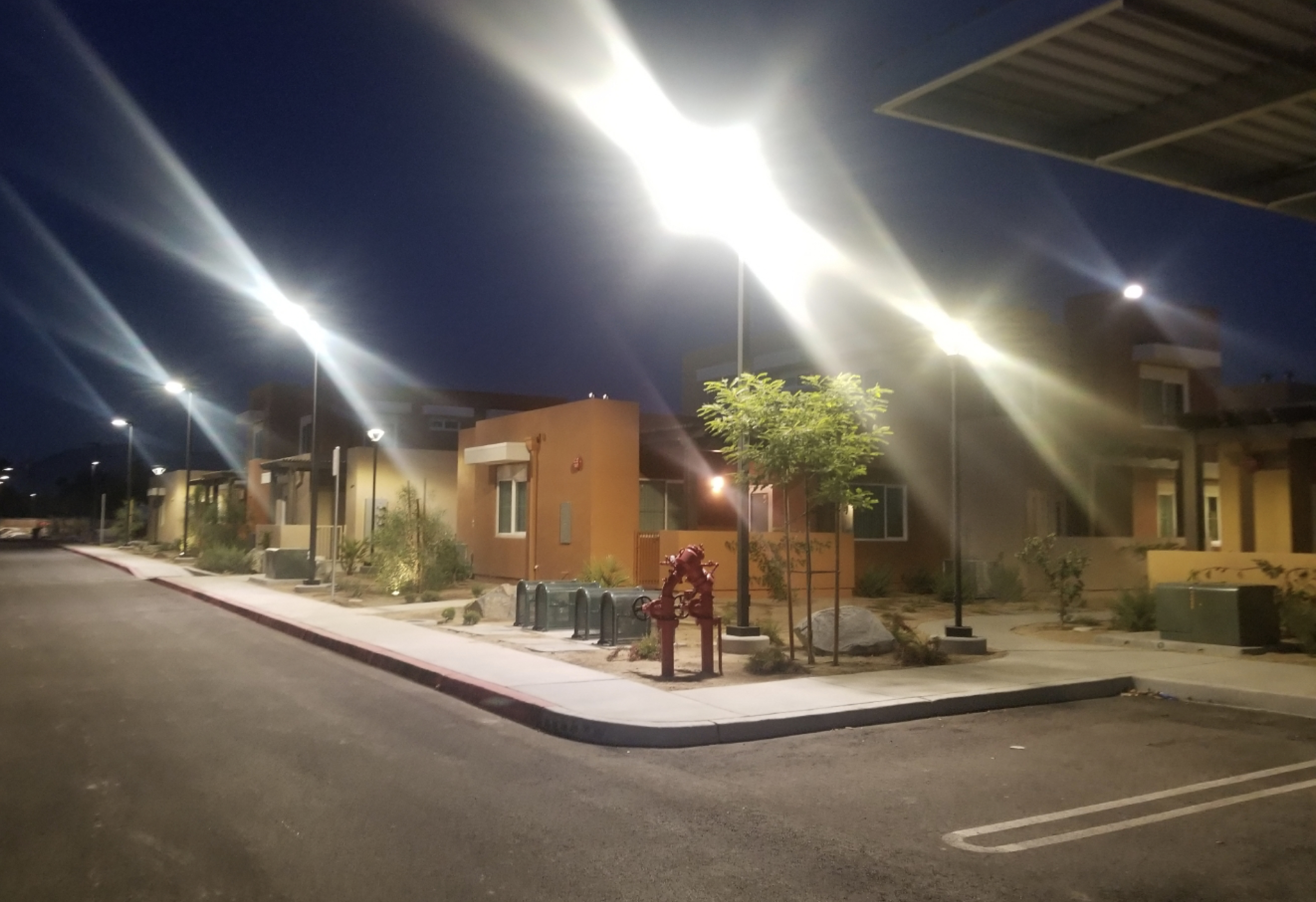 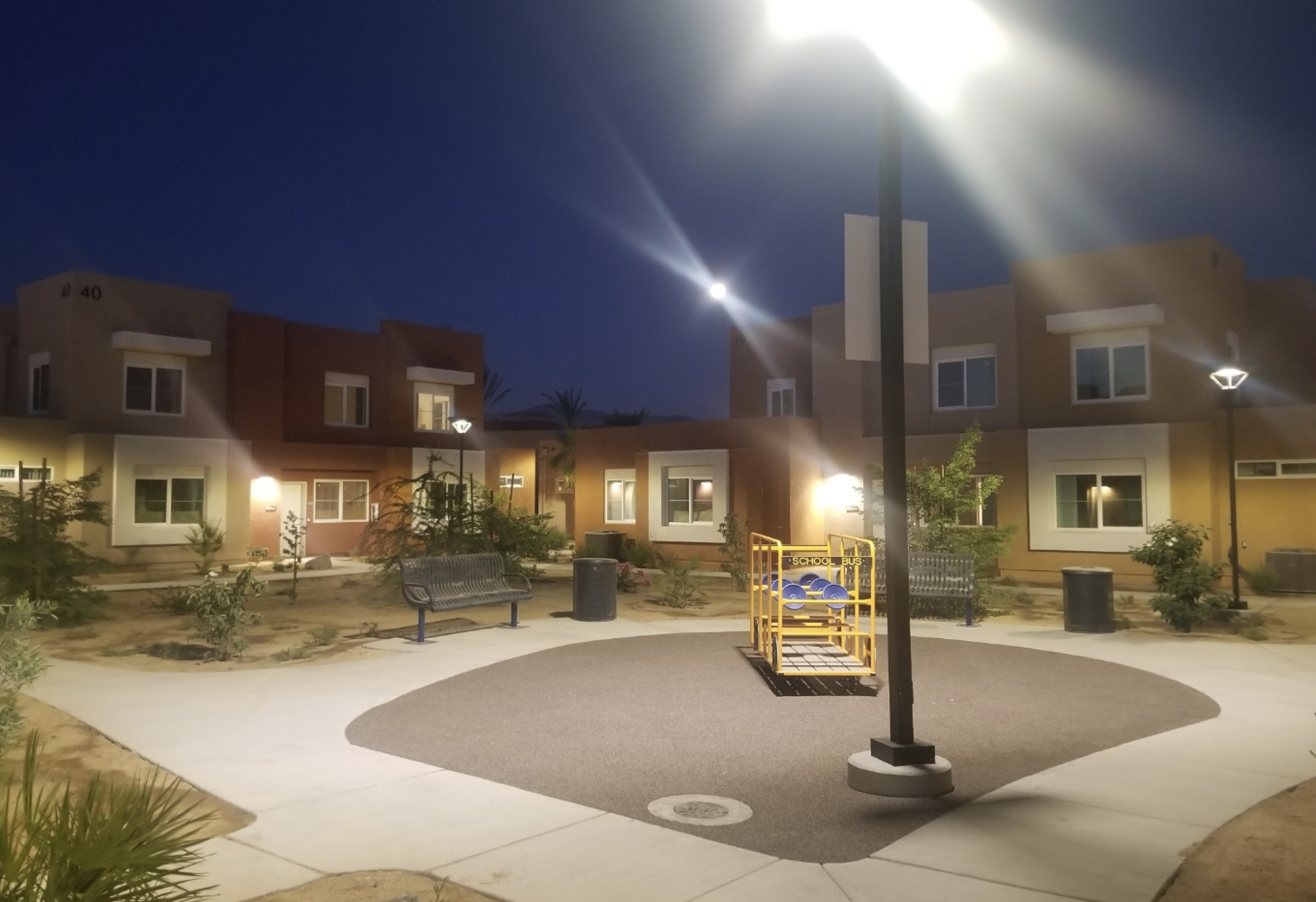 Sun Country’s Giving Back program took us to a Turnagain Arms, a Community HousingWorks property in Fallbrook, CA, where Sun Country staff members and their families spent a Saturday doing maintenance work.  Thanks, CHW for giving us the opportunity to give back. 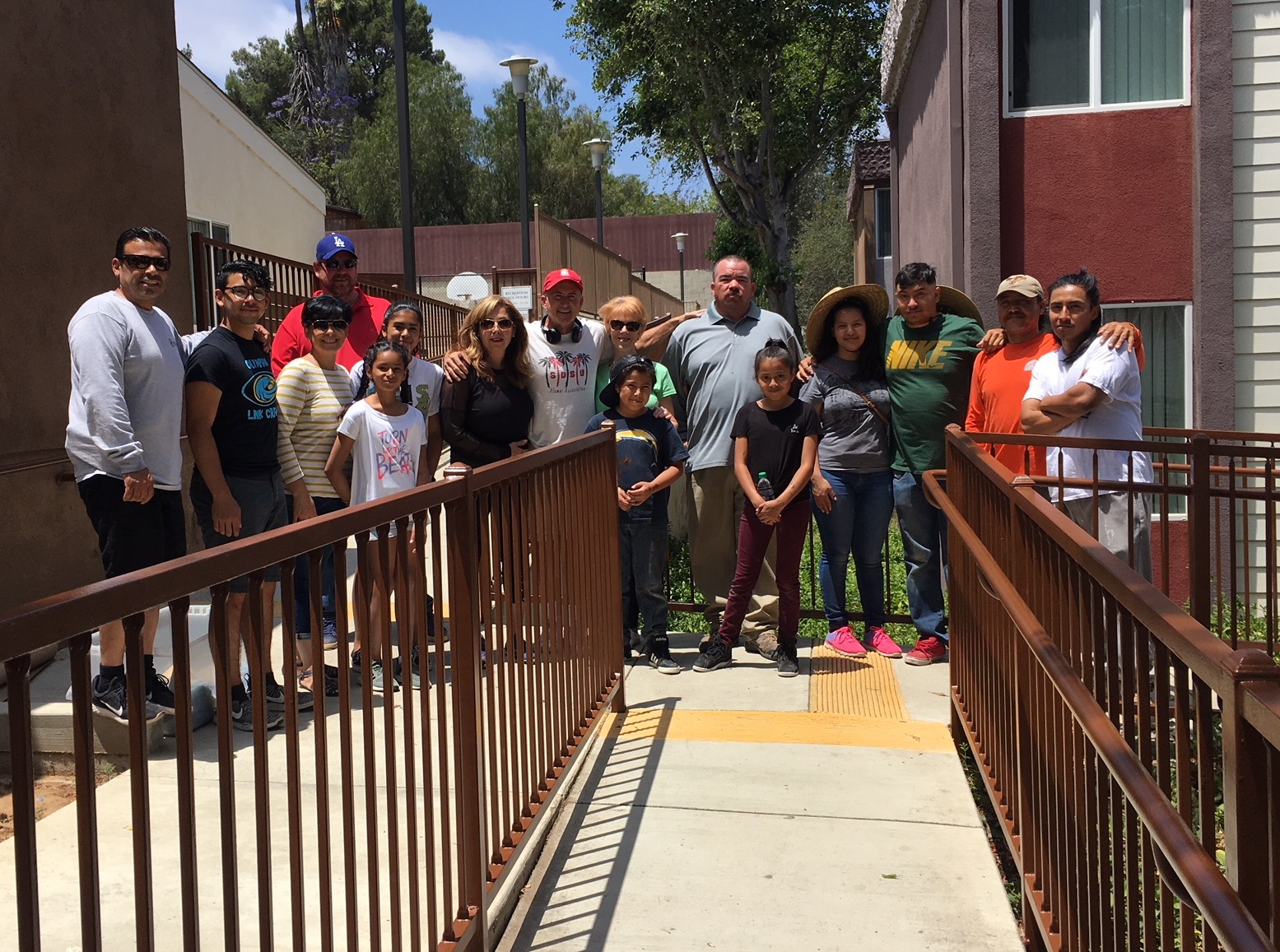 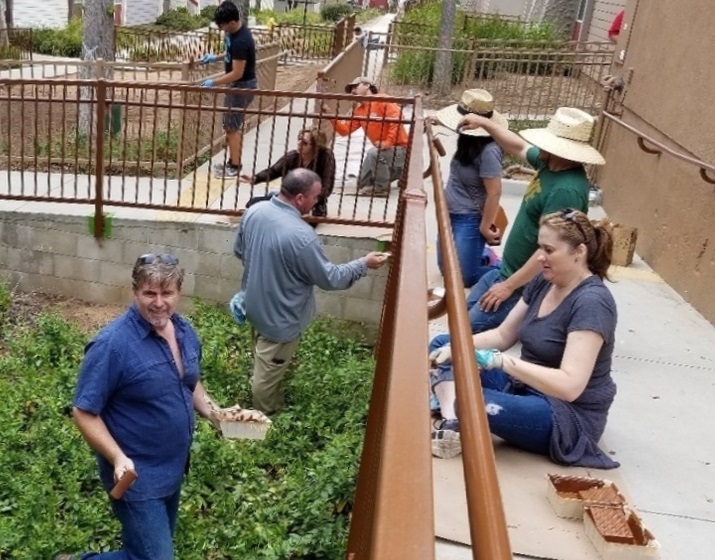 Sun Country Builders congratulates Community HousingWorks and BRIDGE Housing on their 2018 Gold Nugget Awards nominations. We look forward to seeing everyone at PCBC in San Francisco. 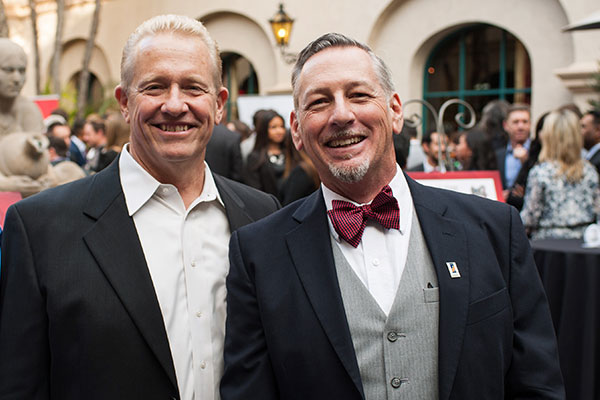 John is deeply grateful to have been named Development Partner of the Year 2017 San Diego Housing Federation Ruby Awards and thanks in particular the three clients who together submitted the nomination, Community HousingWorks, San Diego Interfaith Housing Foundation, and Wakeland Housing & Development for the confidence they have placed in Sun Country Builders, and thanks also all of Sun Country’s clients, colleagues, and friends from the past 35 years of building and rehabilitating affordable housing.
Thousands of homes constructed, thousands of families
housed.
BUILDING FOR THE FUTURE:
SDSU CONSTRUCTION MANAGEMENT STUDENTS VISIT WORK SITE

Sun Country Builders was recently pleased to host 28 Construction Management students from the Department of Civil, Construction and Environmental Engineering at San Diego State University. The setting
for the field work was the North Park Seniors project in San Diego, of which Community HousingWorks is the developer.

Sun Country is particularly interested in fostering the development of the next generation of construction professionals, and intends to pursue discussions regarding future opportunities for the students. And a special thank you to CHW for allowing and participating in the walk, and for giving Sun Country the opportunity to build the project!

For more information on the
Construction Engineering program:
http://arweb.sdsu.edu/es/admissions/majors/construction.htm 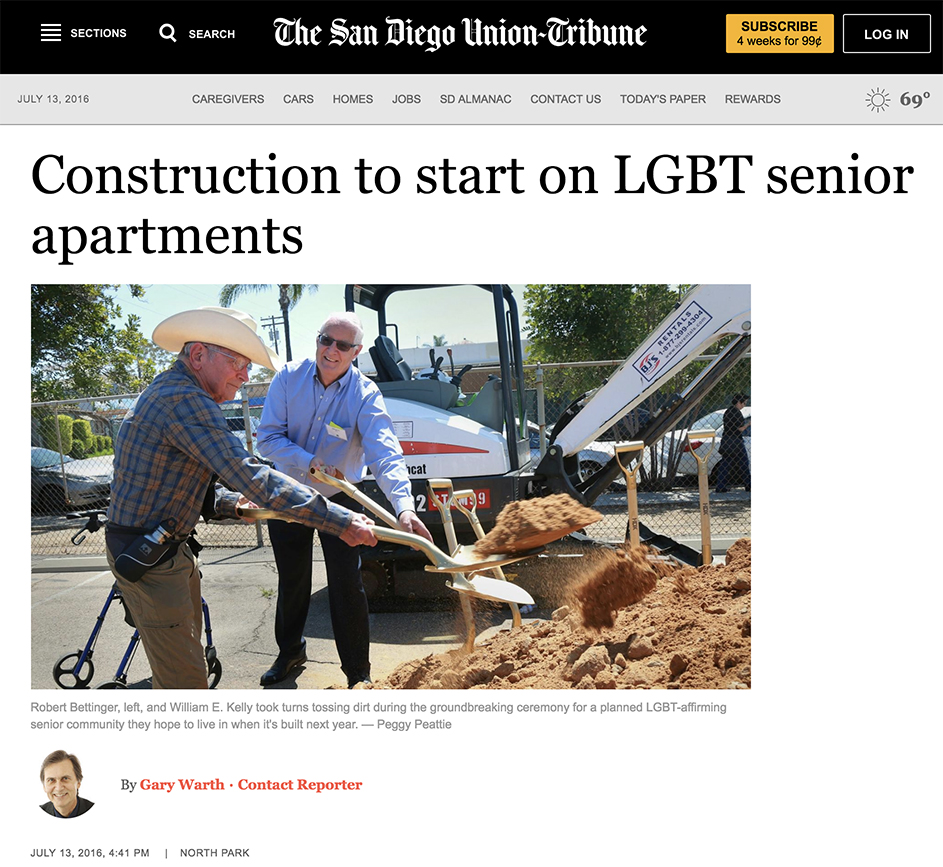 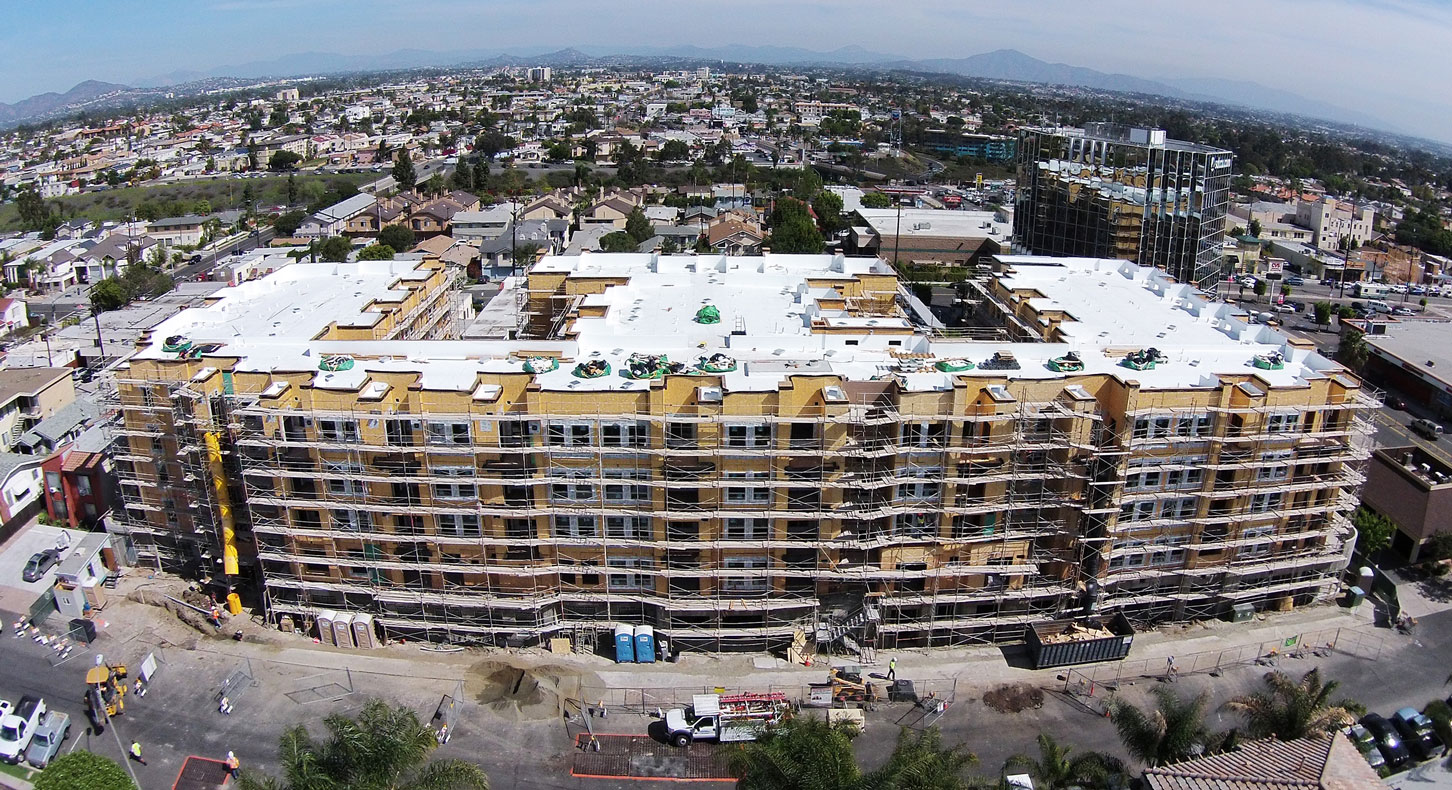 Sun Country Builders was brought into the project early, and was able to work with the developer and the architect to manage the project budget, to eliminate surprises, and to meet project goals.

The community is comprised of four stories on a podium with 120 apartments.

Construction Engineering is a new program in the SDSU Department of Civil and Environmental Engineering. The program is supported by a generous endowment from the San Diego chapter of the Associated General Contractors.

For more information on the Construction Engineering program:  http://arweb.sdsu.edu/es/admissions/majors/construction.htm

Sun Country Builders has been building multi-family projects in Southern California for more than 30 years, and has specialized in affordable housing projects since the early 1980s.  Iowa Street Seniors, with 120 apartments in four stories on a concrete podium, will be completed in the Fall of 2016.

Sun Country is very pleased to have an opportunity to contribute to the next generation of builders.

CAMP ANZA IN THE NEWS

Camp Anza was a military camp during World War II and a staging area for the Los Angeles Port of Embarkation. When the United States entered World War II after the Japanese attack on Pearl Harbor, over 600,000 military personnel passed through the Camp over the course of three years. Numerous buildings were constructed, primarily wood army barracks. Other buildings, including a headquarters, an Officers’ Club, a chapel and a laundry facility, were added over time.   The Camp was decommissioned in 1946, and was subsequently subdivided for housing developments. Many of the buildings were demolished. Some of the barracks were converted into single-family homes on-site, and some were moved, and the buildings that were retained, including the Officers’ Club, were significantly modified. The use and look of Arlanza, as the Camp Anza area came to be known, changed greatly.

Growing up in the 1960s in the Arlanza neighborhood of Riverside, a boy named Frank Teurlay played in and around the remnants of Camp Anza, and in adulthood, although he had moved away from Riverside, he began to find out all he could about the history of Camp Anza.  In particular, he became driven by the idea of preserving the Officers’ Club, and he approached city representatives, who were persuaded by his vision. In 2012, the City of Riverside issued an RFP for a project which would include the preservation of the Officers’ Club, and the construction of new housing for disabled veterans and their families.  What could be more appropriate? 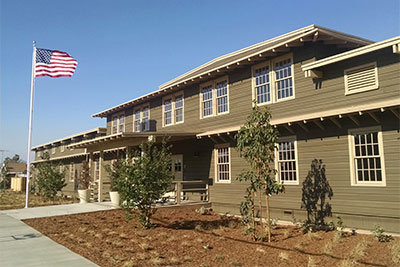 Home Front at Camp Anza, and the Rehabilitation of the Officers’ Club
After the sale of the Camp Anza complex, and the repurposing or destruction of many of the buildings, the Officers’ Club stayed on, becoming a Moose Lodge for decades.  Eventually, however, the deteriorating building fell out of use. The RFP for renovation of the building, and for construction of housing for veterans, was won by Wakeland Housing and Development, a non-profit developer of affordable housing throughout California, and the project was named Home Front at Camp Anza.  Sun Country Builders, a general contractor which has specialized in the construction and renovation of affordable multi-family housing since the early 1980s was retained to do the construction work. Thirty new homes for disabled veterans and their families are being constructed, and every effort is being made to return the Officers’ Club to a condition as original as reasonably possible.  A historic consultant oversees the work and has set demanding standards for preservation. For instance, Sun Country Builders is carefully reinstalling the original Douglas Fir siding, and the original interior flooring has been saved, and will be re-installed. New foundations are also being constructed in place, beneath the building.
Postscript

Frank Teurlay recently said, “Great movies often have a moment of real darkness, of hopelessness, which gives meaning to the ultimate resolution.  That’s what has happened at Camp Anza. Helping to bring the Officers’ Club from the brink of demolition to preservation has been a journey of enormous satisfaction.”  It’s also resulted in enormous satisfaction for Sun Country Builders, as we are given the opportunity to contribute to the preservation and to the development of the community.

NORTH SANTA FE APARTMENTS
Vista, Calif.— Sun Country Builders has begun construction of North Santa Fe Apartments, in Vista, Calif, its eleventh project for Community HousingWorks, a San Diego-based not-for-profit real estate developer which specializes in developing affordable housing. The transit-oriented, high-density, smart growth community, scheduled to be completed by late summer of 2015, will add 68 much-needed affordable housing units to the community, directly across the street from the multi-modal Vista Transit Center, and a short walk from extensive commercial services. Ten of the units will be exclusively designated for homeless Transition Age Youth, who will be aging out of the state care system, and who will be given developmental support at North Santa Fe through the services of North County Lifeline.
Sun Country Builders provided pre-construction and cost-control services to CHW from the beginning of the design phase, and, working in close cooperation with Rodriguez Associates Architects and Planners, delivered a final construction budget which met the project’s original planning budget. Sun Country will deliver a finished project which will be GreenPoint Rated through the Build It Green system, including “green” and recycled building materials and which will perform 25 percent above California Energy Code Title 24 standards.

Land for the project was donated by the City of Vista and the City of Carlsbad provided Community Development Block Grant funding. Additional financing came via construction and permanent loans, and Low Income housing Tax Credit Equity, all provided by Union Bank.

North Santa Fe will bring Sun Country close to seventy multi-family housing projects completed since its founding, in Vista, in 1979. 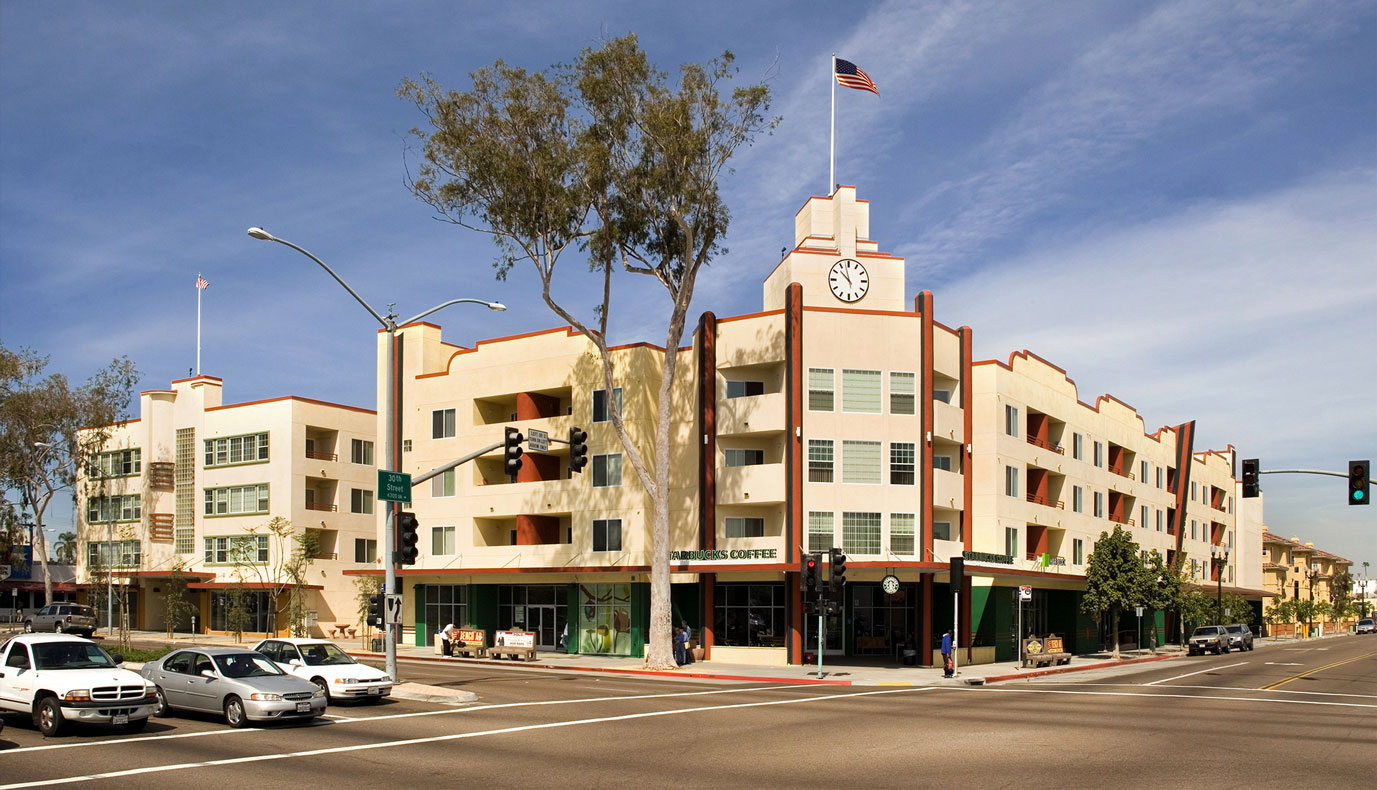 The historic Heilig-Meyers Furniture Store at 30th & El Cajon Blvd. closed down in 2000 when the company filed for bankruptcy.
Like a phoenix, the aptly-named Renaissance at North Park rose from the ashes. Incorporating parts of the furniture store’s architecture and reclaimed glass blocks from the original storefront, we helped develop a new, high-profile mixed-use development in one of San Diego’s most up-and-coming neighborhoods.

Consisting of 96 units over three stories, this affordable housing complex specifically for seniors resides over a level of retail space and a common area at street level. Beneath it all sits almost a full one acre of underground parking.

We’re particularly proud of our work at Renaissance, providing a community center, lots of easily accessible business locations both for neighbors and as shopping destinations, and solid, quality housing in an historic neighborhood with a solid ethnic mix that doesn’t often see these kinds of results.